A couple of months ago Jenny did the research to find a contractor to clean air ducts and dryer vents, and negotiated a fixed price. 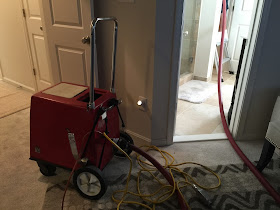 She posted the information to Facebook and several homes in the community used the service. (Other homes have used different contractors as well.)

Air Duct Cleaning
The ducts in different units had varying amounts of dust, construction debris, and (especially in floor registers) objects that had fallen into the ducts including children's toys. 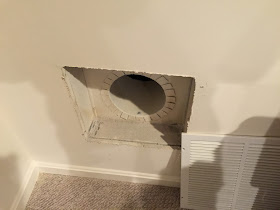 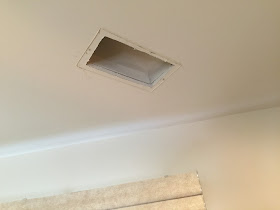 For this service all of the registers and return vents were removed and a vacuum hose with rotating brush attachments of varying sizes (to properly fit the duct) were used to sweep out and vacuum the ducts.

Dryer Vent Cleaning
The National Fire Protection Association estimates that 1 in 22 home fires are caused by accumulated dryer lint, about 16,800 nationally in 2010.

The same rotating brush and vacuum were used to clean out the dryer vent all the way to where it exits the side of the house or the roof, as well as the flexible dryer tubing and the dryer itself from the rear exit.

A lint removing brush was also inserted through the lint trap to knock lint free from that point, which then was swept away when the dryer was turned on.

Afterwards, it may be left to the homeowner to replace the registers and vacuum up small amounts of dust and sheetrock debris left behind on the floor.

(Also, in the case of the caulked registers, the caulk sometimes removed some sheetrock, and spackling and painting was required.)